It was long ago and far away, and it was so much better than it is today...

Earlier this week I found a copy of the game "Hard Ball 5" at the GoodWills, and while perusing the CD it came on I found the installs for both Adobe Acrobat 1.0 for DOS and 2.1 for Windows.  I don't think I ever installed or even used Acrobat with DOS, so this will be a treat.

Both installed very easily, although the DOS version was pretty heavy on the "which dir", and "are you sure", but that was DOS.  The Windows install was WHAMMO and it was done.


I tried opening a 'modern' PDF with both versions, and as expected: NOPE. 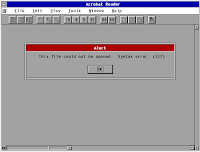 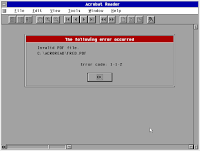 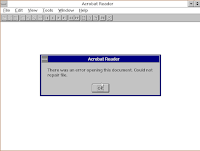 A week or so ago I jumped into Commodore 64 emulation and based on a friend's response I was prompted to find HardBall for the C64.  Yesterday while perusing the GoodWills I happened to run smack into a vintage (1993) copy of Hard Ball 5 for the PC.  So of course I had to scoop it up. 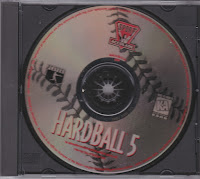 I did a cursory review of the box and contents at the store, and based on that very high level scan I thought I was getting the CD, manual, etc.  Now after getting it home and going through the contents in more detail I find that I did get the HB5 CD, install instructions and a reference card, but the manual (and another reference card) that was in the box was for another baseball game, Old Time Baseball (although the HB5 manual is on the CD).  So I got that going for me, which is nice.

I'll get around to doing a review of the game itself at some point...

Picked up two VCRs this morning at a neighborhood garage sale.  Both are in good working order.  One had a $5 price tag on it, the other had a $125(!) price tag on it...that was a mistake.  I got them both for an even tenner. 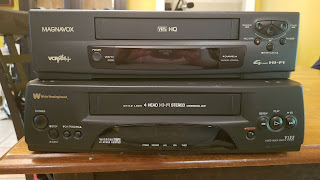 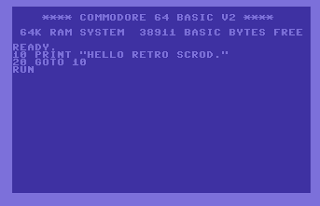 I was seven when the Vic-20 was released, and nine when its big brother the C64 was released.  In between those two the TI 99/4A was released, and that's the first PC I wound up getting (although not until 1983 and only after Texas Instruments had lost the Price War with Commodore and reduced the 99/4As down to $49 for Christmas 1983).  But it was the Commodore's that I'd lusted after as a kid, seeing them temptingly placed at just the right height on the shelf at K-Mart, all hooked up to a color monitor and inviting us to test them out.  I wonder how many kids typed their first "program" on one of those at a K-Mart?  I did, and while I'm not sure what the text was, I'm sure that a) it was a simple 10 print, 20 goto loop, and b) the text was most certainly not "Hello World" nor something rude and/or naughty (I promise...).

I STILL haven't got my hands on a Commodore, in any of its generations (although I do have the Monkey's on the lookout for a good deal on any version...).  So until I do get something physical to work with I've decided to jump into the emulator world and give the VICE C64 emulator a whirl.  I wanted to find a "portable" emulator that doesn't need installing on a PC so that I can put it on a USB drive and run it form there without any issues.  Turns out what appears to be the "best" C64 Emulator, VICE, has a portable package which is what we're going with today.

I'll post more once I've had time to fiddle around and figure things out from a usability standpoint.


The Entire Commodore Universe
on one screen